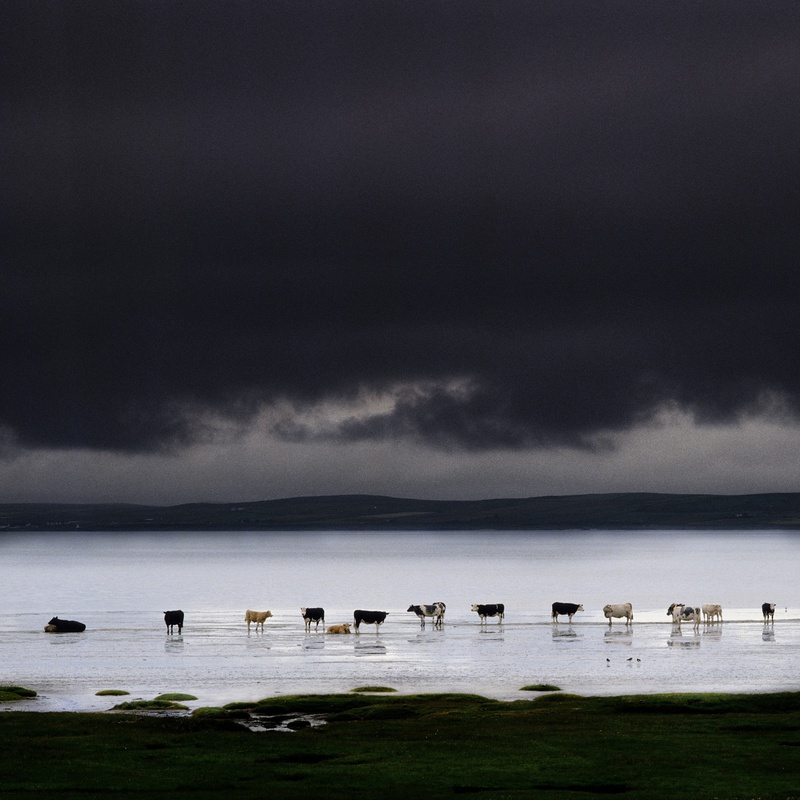 Charlie Waite describes the moment he created his highly original photograph of seventeen cows paddling on the beaches of Loch Indaal, a sea loch on Islay, the southern most island of the Hebrides, off the west coast of Scotland.

"I once showed this photograph to a collector and without any hint from me whatsoever he decided to call the image of Loch Indaal on the Island of Islay, the 'Celestial Cows'. There is no doubt in my mind that they were absolutely 'meant' to be there for me in that straight line. It was very gloomy that day and the cows were in a state of disarray over to the right, and it was raining heavily.

I felt that there was little chance of an image being made that day and yet something in me decided to persist and wait. Slowly but surely the tide began to recede in the sea loch, and as it did so the cows chose to take up a line one beside the other on the same axis and began to start what I can only describe as a 'cow paddle'. However, there was still one crucial and pivotal missing element; the right light.

For a further 10 minutes as the cows continued to paddle there was a moment when one of the cows started to come towards me, and I remember distinctly shouting out and begging for it to go back to join its friends and remain in line. Somehow it understood and did so.

But the heavy dark sky persisted and there appeared to be no wind to push the grey mass away to allow just a little light to illuminate my cows.

Then there was the most extraordinary and thrilling moment. A light breeze developed and in the next five minutes a slender gap began to emerge above and very soon the most beautiful, silvery and luminous glow appeared directly above and lit up my line of cows in precisely the way I wanted it to. In under 45 seconds the moment had gone, the gap in the sky was consumed and my cows were once again subdued in the same grey and uncomplimentary light that had prevailed when I had first arrived and as if by some command from above, their regimented line broke up and they moved away.

But I had made my image and I shall have it now forevermore and I can only hope that others will enjoy this image which so nearly was not to be."  Charlie Waite