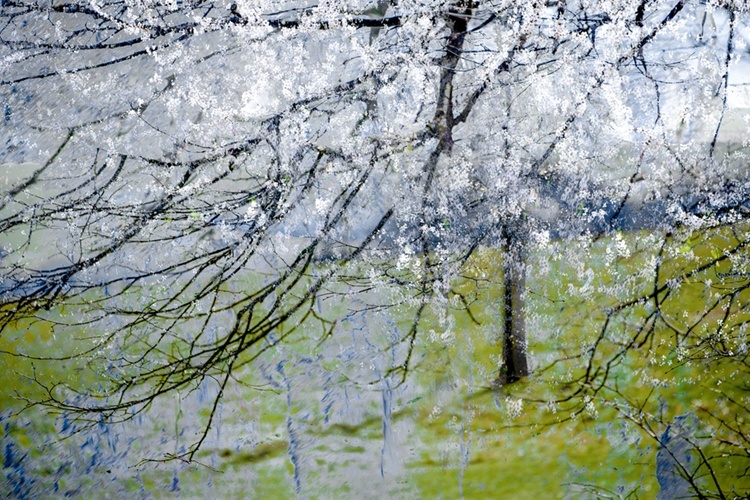 "Despite T.S. Eliot's assertion that 'April is the cruellest month', I invariably feel a sudden surge of wellbeing
and optimism when the first scent of spring hangs in the air. I know I'm far from alone in this -
photographers and artists surely feel that sense of excitement as keenly as any gardener eagerly rifling
though their seed packets. Mother Nature, it seems, is handing us our images on a plate. The light is soft
and benign, the colours, gentle, and the countryside seems to suddenly be filled with boundless
enthusiasm. Quotes such as 'Spring is nature's way of reminding us that every day is worthy of
celebration' pop up on social media with unfailing regularity - long before the first cuckoo is heard.
This image was taken at Stanmer Park, just outside of Brighton. A blustery day in early April, the air was
filled with the sweet smell of April and the profligacy and exuberance of the new growth emerging was
inspirational. Blossom-laden branches were everywhere but I concentrated on one small tree that stood
apart from the rest. For reasons unclear, its tiny flowers seemed whiter, fluffier, altogether more generous
than that of any of its neighbours.
It was bitterly cold. The type of cold that can only be experienced when one has left home in overly
optimistic clothing, only to realise that the wind chill factor hadn't been accounted for when getting
dressed. I struggled on for about half an hour - reluctant to retreat to the warmth of the nearby cafe and
the very enticing appeal of a cup of coffee. Fortunately my inspiration came quickly - as the tiny petals
blew around my head and I stood there shivering in all my sockless optimism, I realised it felt like nothing
more than being encased in one of those half-domed snow globes. The fiercest blizzard was surely never
this intense. I certainly couldn't imagine it ever being this cold.
Photographic perfection is not my objective. Its obedient conformity initially attracts, but, for me, leaves
little enticement to investigate further. So it was that the tangled complexity of branches and the disparate
arrangement of blossom engaged, rather than frustrated my aspirations. By layering image upon image,
frame upon frame, I was able to build up the layers of blossom and emphasise the movement of the
branches. All photographic images represent a moment in time. The way I make my images combine
several. I walked around the tree, back and forth trying to engage with the long-limbed gaucheness of its
extended branches.
The colour palette needed little intervention; I don't think anybody makes a paint called 'blustery blue' but
perhaps they should. This contrasted beautifully with the jade and emerald grass, subsequently overlaid
with soft white snowflakes and created, what for me, was a very pleasing and fresh arrangement of
seasonal colours."