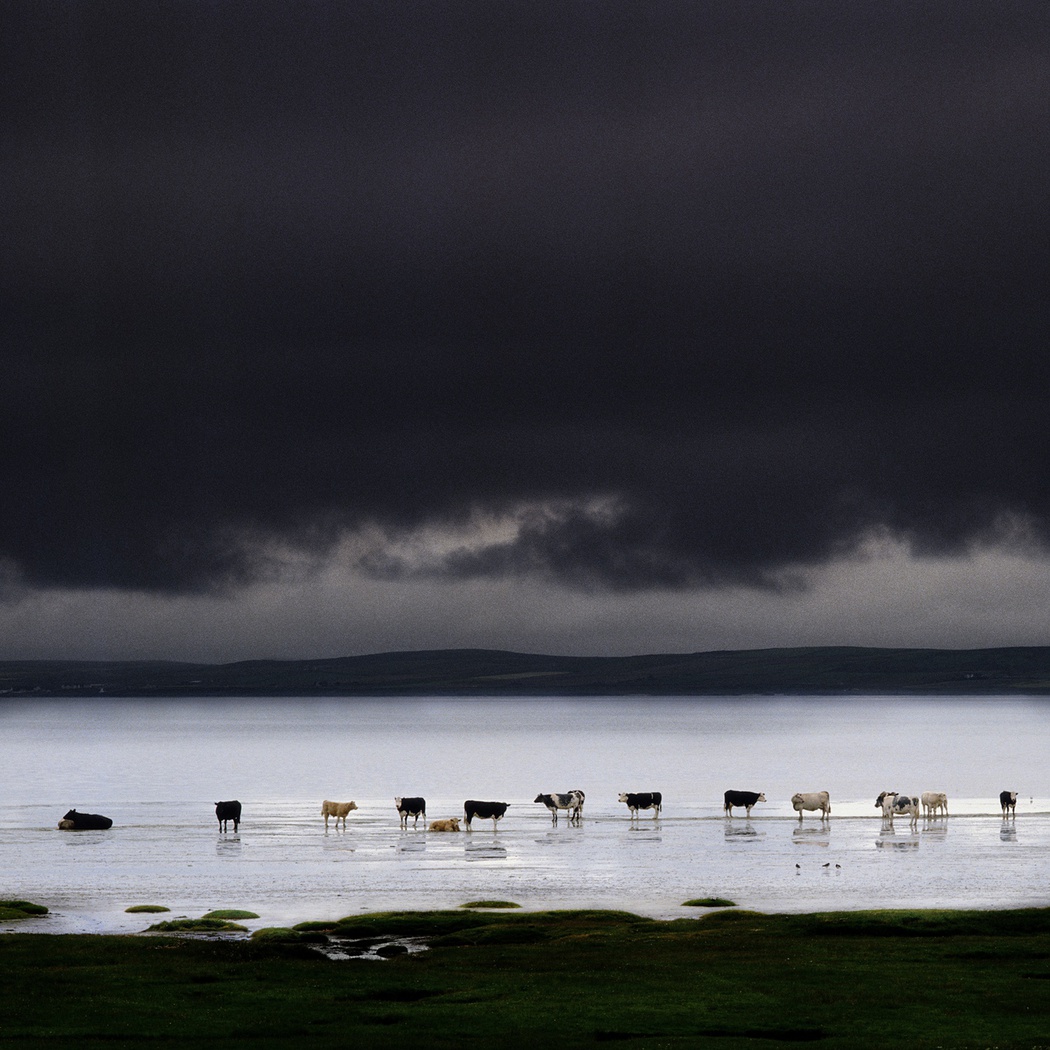 I have never had the opportunity, and quite possibly never will again, to photograph a collection of cows paddling in the shadows of a Scottish loch, and the immense pleasure I derived from simply observing these fine animals was very considerable. When I first came upon the edge of Loch Indaal, these 'celestial' cows as some folk have called them, were in a confused bunch at the far end of the shore. If the photograph was going to work, I needed the cows to find some good reason to break up and meander along the shoreline before the skies began to clear. I could see that a collective agreement was in the making, but oh, how painfully slow was the process. Essentially they needed not only to form themselves into a straight line, but also to ensure that they did not bump into each other nor wander towards me. They needed not to wander off piste. It was also critically important that their line should be parallel to the near and distant shore.

I became acutely aware that the very low clouds were on the move and a slight wind ripple out towards the centre of the loch confirmed this was probably so. Behind me, the skies were looking clearer. The success of this image rested with the dark prevailing stormy skies remaining where they were. All that was needed was a sliver of a gap between the clouds to allow some diffused sunlight to pass through. Hard sunlight would have been quite wrong.

Over a period of forty minutes or so, the cows gradually complied, and better still, they thankfully chose to go on paddling, while still maintaining their fairly untidy line. At least they remained on the same axis. Then, the most catastrophically unexpected event took place and one that I never dreamed would have happened; some of the cows lay down. While I am quite good at mimicking the sound of sheep, I had no skills whatsoever in communicating with cows. I have long admired and wondered at all animals and in particular cows, which often strike me as more elevated than we give them credit for. But sadly I was hopeless at any mooing and when I did try to do so, they looked up and across at me with complete contempt. Despite my pleas to get up and reform themselves into the relatively straight single-file line they had achieved before, along with my concern that the photograph could lose its cohesion if they chose not to stand up, those that were lying down basking in the shallows decided to stay there. I should enrol in learning better communicating skills with these wonderful animals.