What Is A Photogravure Print?

Pictorialist photographers of the late 19th and early 20th centuries used a number of complex and lengthy printing techniques to bring to photography the impressionist qualities of 19th century painting. The dominant printing process was Photogravure which sought to solve two main problems that these artists faced. The first was the difficulty of producing multiple editions, the second was the problem of durability.

Photogravure printing was invented in 1879 by Czech painter Karel Klíč, and peaked in popularity around 1900. The method produced very high-quality, stable prints using a combination of photographic and etching techniques, and was widely regarded as the most beautiful and luxurious means of printing the photographic image in ink.

Photogravure prints typically looked smudged and velvety, which complimented the soft-focus techniques common to photographers of the era.

The basic process was to photographically transfer an image to a polished copper plate, etch the image onto the plate, and then print from it using a press. Damp paper was pressed onto the etched copper plate, which had minute reservoirs of varying depths of ink. The deeper etched areas held more ink and transferred more ink onto the paper, creating the darker areas of the print. The image in ink was thus transferred from the plate to the paper by passing the paper between the rollers of a press under heavy pressure. When viewed under magnification, the photogravure print is seen to be in three-dimensional relief, with a thicker layer of ink in the shadows and darker tones, and thinner layers in the lighter tones and highlights.

The process was capable of reliably reproducing the detailed, continuous rich tones of a photograph, and its strength lay in the fact that multiple numbers of prints could be made quicker, and for a fraction of the price of one platinum print.

How Do You Identify Photogravure Prints?

Photogravures have a very sensual, almost velvety quality with warm blacks and a charming range of subtle shades of grey. It is quite easy to identify a photogravure print. Look at the print with a good magnifying glass and you will see a characteristic honeycomb appearance. This is caused by the grid used in the printing process. The image also appears soft, and the dark areas seem pitted.

In the early twentieth century Photogravure metal plate printing thus became an efficient way to produce multiple runs of prints for books. Alvin Langdon Coburn (1882-1966) was a master of the photogravure process, and the most important artist of the era to devote significant time to illustrating books with his photographs. He was a meticulous printer who mastered the printing process from his home Thameside, an old four-story house by Hammersmith Bridge where he set up two copperplate printing presses in his studio. He made all the gravures for his books, London 1909 and its sister publication New York 1910, which are considered two of the cornerstone photography books of the 20th century. He etched and steel-faced the plates, and pulled the prints himself, which have a delightful elegance with outstanding nuances of grey tones. 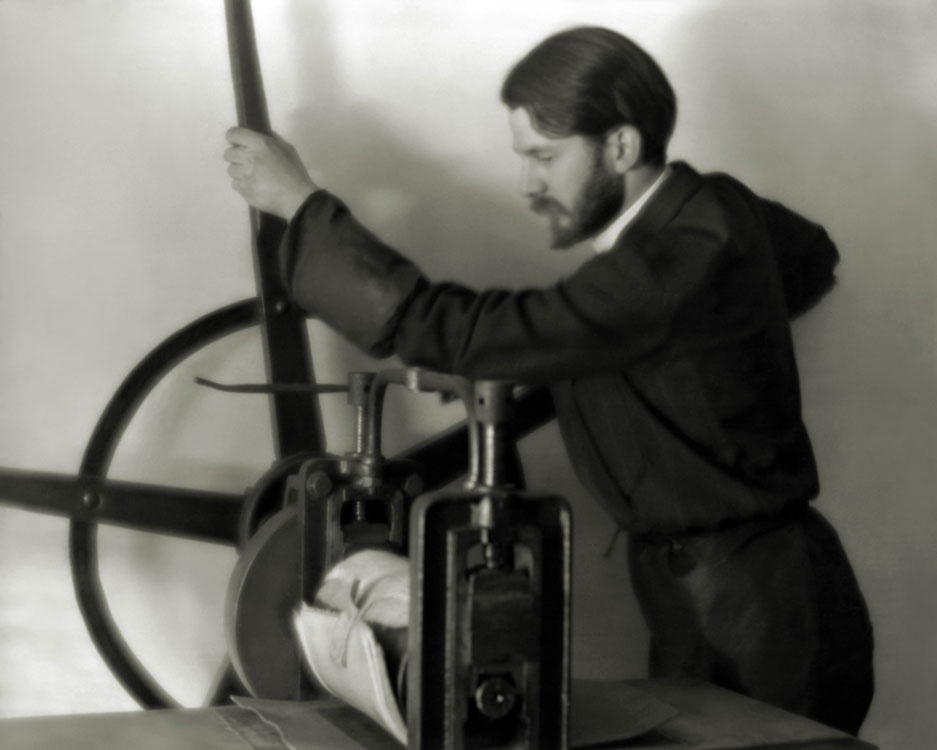 ''I think I may claim that in my hands photogravure produced results can be considered as original prints, which I would not hesitate to sign. I prepared the printing plates myself, by etching and steel facing them. I ground the inks and pulled the plates on the various grades of paper until I had a specimen for my printer to follow. No one will ever know save those who have experienced it, what such an undertaking involves." Alvin Langdon Coburn, 1909

"Life has been a never-ending adventure with me, and although I may have been at times addicted to the pursuit of air castles and dreams, I have always been brought back to earth by the mechanical nature of my process. You may dream as much as you like before nature, but when you come to make an exposure you must think, in the definite terms of science, and in the darkroom a man who dreams is apt to have a rude awakening." Alvin Langdon Coburn 1909

Is this of interest? Please add your comments below…